This is a sequence of photos to show how to replace a rim. Old wheel, new rim a Sun ICI-1 alloy job, some basic tools and some engine oil. The rim is 451 diameter - that's about 21" and is bigger than the normal folding bike 20" which are usually 406. The upside is that pedal clearance stays as original, and being tall, I like the bigger wheels. The downside is that tyre choice is limited. 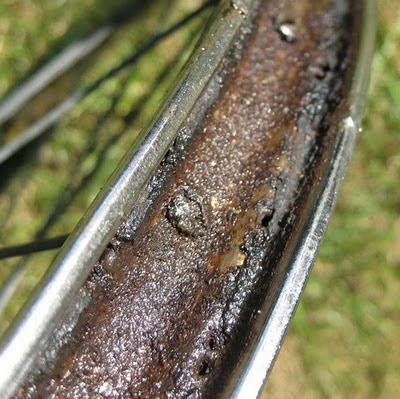 After removing the tyre and tape, this is what I saw! A rotting rim - definitely dangerous. I wondered whether it was possible to re-use the nipples though. Liberal spray of WD40 to loosen things up. 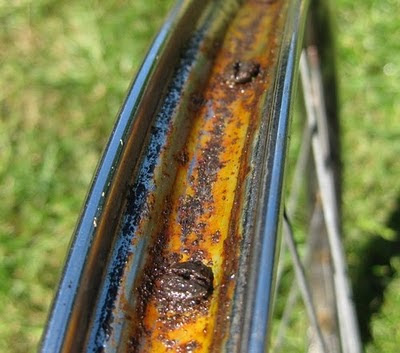 Quite rusty nipple heads. So, out came the wire brush.... 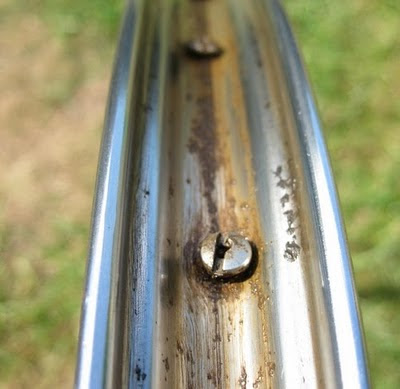 And the wire brush worked wonders. As you can see, I've loosened all the nipples now, so that the spokes are not under tension and I know that each nipple unscrews. 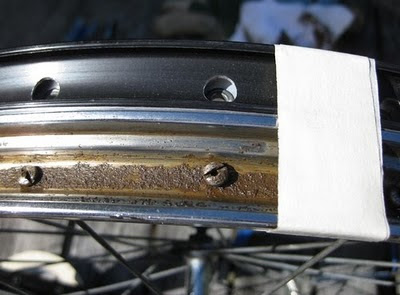 Now using masking tape, fix the new rim next to the existing one, like the photo above. 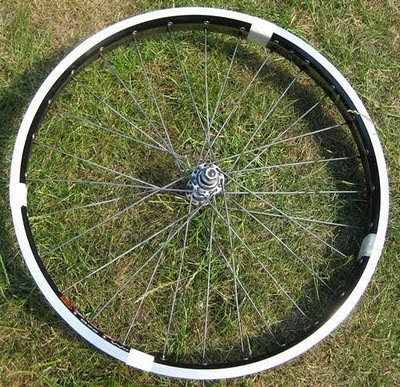 Tape it up, new rim to old, in a few more places. 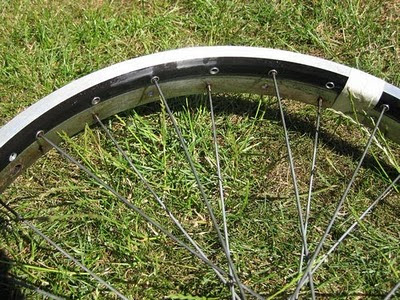 Start off by transferring the spokes that are nearest to the new rim. In this case, 28h, that means every other spoke. 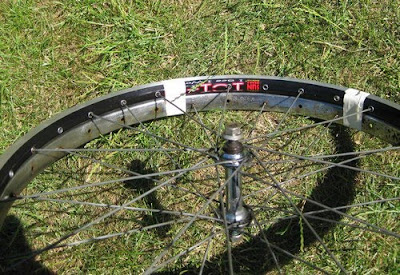 After that, start transferring the other spokes. Here at the top left, you can see the first spoke transferred over to the new rim. All spokes now transferred over. It's now laced up. Cut the tape off and tighten up all spokes so that the tension is even all round. You can use a spoke nipple initial setting tool for that. I don't have one, so I just used a screwdriver to bring the spokes up so that they were level with the bottom of the slot in each nipple. Then felt them all by hand and adjusted by feel. That was how I set the initial tension. It's really important to get that starting point right, because it helps to ensure that the rest of the tightening up procedure goes smoothly. 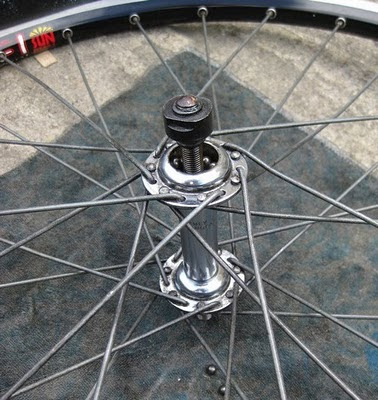 Before starting to tension the wheel up in earnest, it was time to dismantle the hub. The ball bearings were bone dry, but they were all there and in pretty good condition. 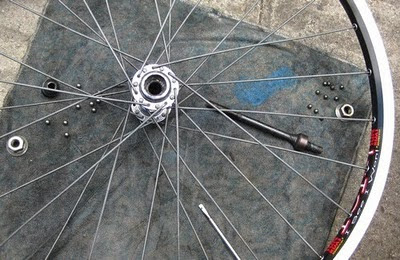 So this is the hub dismantled. A simple and quite well made design, I reckon. One cone moves, the other screws down to a bedding ridge on the axle. The cups were really dirty. 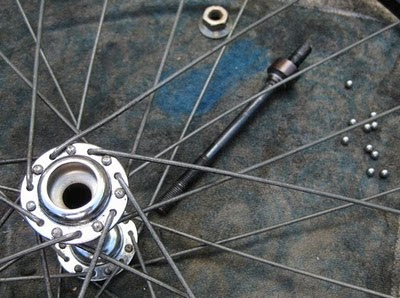 I've cleaned up the cups and all the parts, ready for greasing and re-assembly. 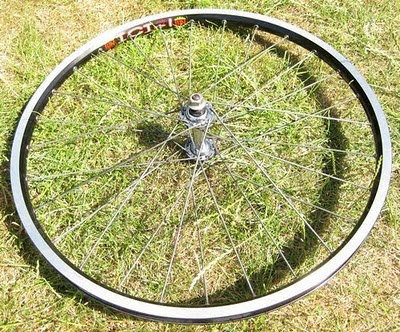 Assembled. All I need to do now is wipe off the grease outside the hubs, put the wheel in my truing stand and tighten it up progressively and steadily. 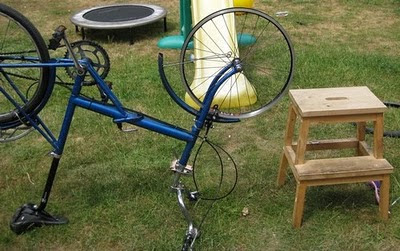 Here is my truing stand! The stool is to sit on. It's a pleasant and relaxing job, I find. I start off with whole turns on each spoke, then spring the spokes by hand (wearing leather gloves helps for that), and check for hop and wobble. If either are present, remove them. I try to work out why the hop or wobble exists - at early stages, it's normally that one or two spokes are too tight or loose. The idea is to get them all even tension and the rim nice and circular. So after some full turns, then I move to half turns, and finally quarter turns on every spoke. 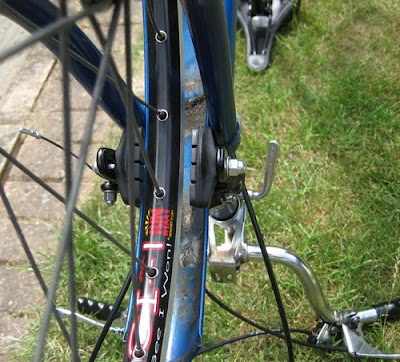 I use the brake pads as a guide for working out where the wheel needs some work. 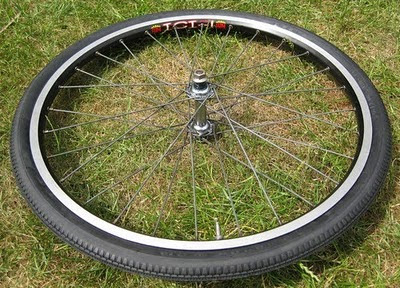 The finished wheel, shod and ready for fitting to the bike. The whole sequence above took me about 2 hours in total. It went very smoothly and is incredibly satisfying to build an smooth running wheel that is fast and true. I've now made four wheels in total over the years (two involved lacing up from the start and the other two were rim replacements). This was the easiest and the best yet!
The original steel rim weighed 550g, while the new alloy rim was 320g. That means I saved 230g just by replacing the rim! That's the same weight as a packet of butter rotating around the perimeter of the wheel.
Posted by Chuck Glider at 16:43